Investigation-based games are hard. You can’t just run up to the enemy and roll dice at them until they go away. No, you have to find the clues, understand the clues, locate more clues, understand them, then put together a picture and figure out what to do about it. Add a horror element and it becomes all the more brutal as mistakes can be lethal if the players don’t adequately search for clues before busting down that locked door to the room containing that shoggoth. 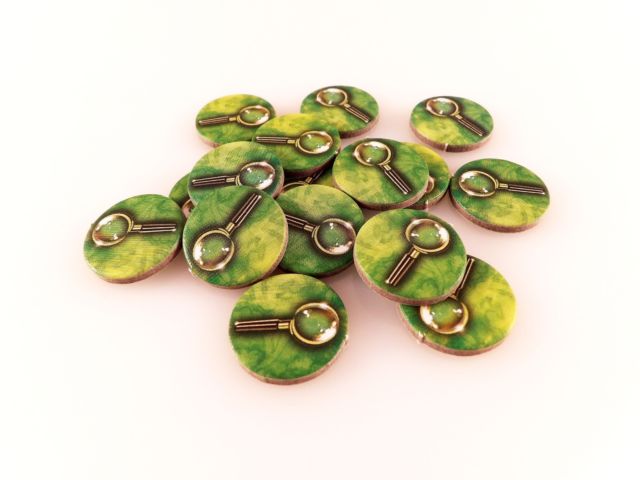 When these clue trails confuse and overwhelm new players it’s often frustrating for all concerned.

This handy little device can be rewarded for playing within the genre and can then be used to get players out of an intellectual bind.  You could reward them for looking before leaping, exhaustively searching the crime scene, making a point to interview witnesses in a productive manner, using ingenuity to solve problems, using teamwork to surmount obstacles, avoiding pain the way real people do, exercising caution rather than just trying to roll dice at a monster until it goes away, showing the strain of the horror situation in character, retaining excellent in-game focus, or anything else that really helps the game.

They can collect up to three of these little babies and then use them to get a free hint to do with the situation at hand. The hint could range from reminding them of their ability to search scenes, pointing out a connection between clues that went unnoticed or telling them that certain clues can be used as leverage against certain NPCs. It could even be used to negate a bad roll that meant they overlooked an important clue.  Maybe there’s something the character should know but the player doesn’t and it gives you an excuse to point out some skills on thiir character sheet.  Sometimes if the clue trail break down has reached a brick wall it might mean that you create a new clue entirely that helps the game move forward such as having the password to that computer written down on a post-it note tacked to the side.

I trialled this system years ago with a group of players who had little to no experience in the investigative genre of game and it turned out to be really effective.  I used the clue tokens from the Arkham Horror Board Game to represent them so that the players had a physical reminder at hand.  I gave them a single free clue token at the start of the session and told them that this freebie will disappear at the end of the night in order to encourage them to use them rather than hoard them. Otherwise they might have hoarded it and never learned the value of using them.  Later tokens could be carried over between sessions.

Do you have any hints or tricks to help out players with a difficult investigation?

So you’ve created a brilliant piece of investigative adventure write up which has a list of interesting plot points that all lead inexorably to the ending fact – a fact that will shake the foundations of the character’s reality. You pull out the dice. You hand out their sheets. Everyone takes a seat. It’s play time!

One flunked roll or neglected clue later and the characters are all scratching their heads and having a drink down the pub with no idea where they should go next. No problem! You introduce a handy NPC who’s figured out the clue and the team go to the next location only to completely misinterpret the next clue and run off on a wild goose chase.

So what do you do?