When you’re thinking of joining a LARP for the first time, it’s important to consider a few things. Firstly, everyone was new once. While some people have gained some experience in tabletop roleplaying games, re-enactment or improvisational theatre, many have walked in without that experience. The grand majority of players are eager to welcome in new faces, introduce you to the game and get you started with your character. 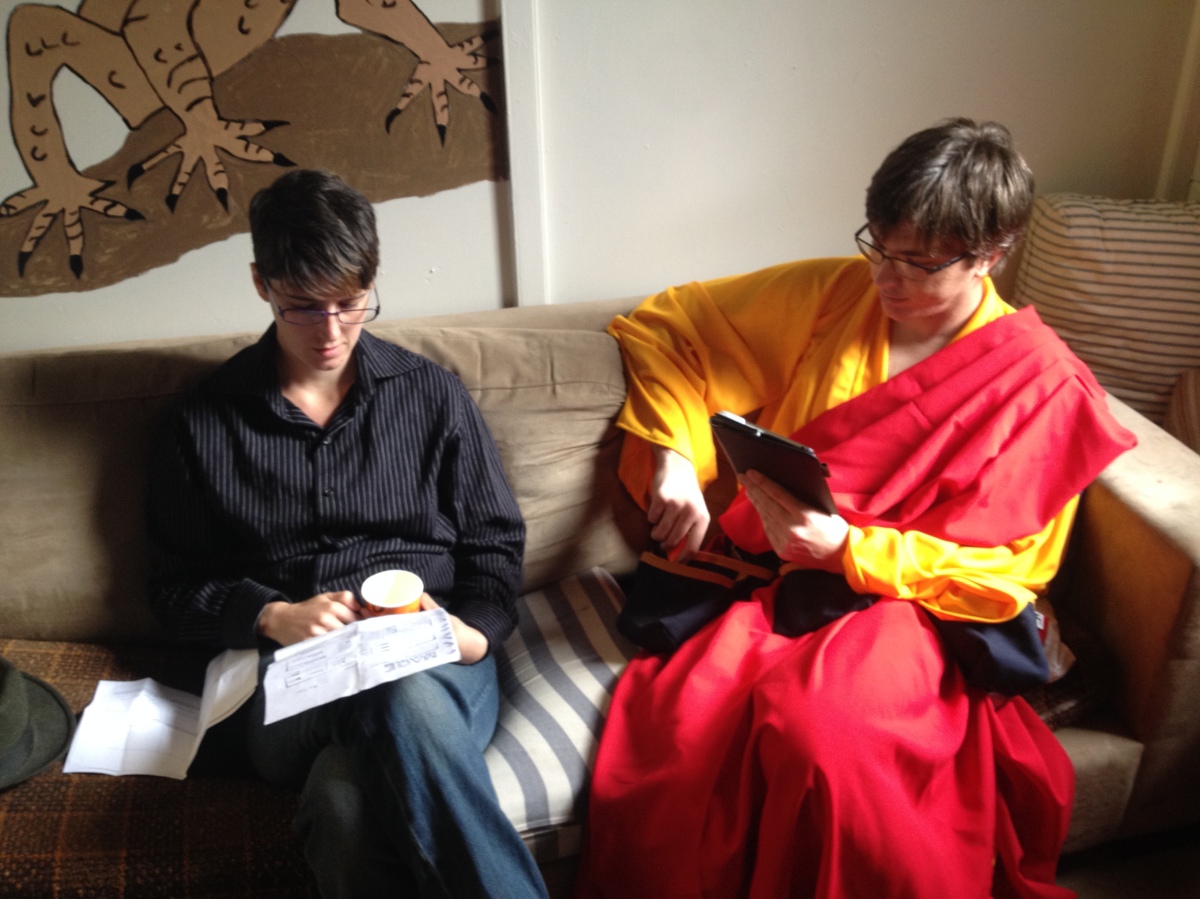 1.       If you’re feeling a little shy, perhaps you could arrange to meet a few players outside of the game first so you have some familiar faces.  ARC Inc. runs a number of social events, many of which are open to the public, which could provide a great way to introduce yourself.  We also have a forum and several Facebook groups that would give you an online method of saying hello.

2.       Contact the Game Master *BEFORE* you attend the game to let them know you’re coming.  Typically you can find the contact details on the LARP organisation’s web-page or message them on Facebook.

3.       Let the Game Master know if you have any previous experience in roleplaying and what sort of games you have played before.   This will help them give you the right amount of advice tailored to your needs.

4.       If it’s an ongoing game with short 4 – 5 hour sessions, you can often gain some benefit from just watching your very first session rather than participating in it.  That way you can get some idea about what sort of characters and skills are most successful within the format.  Obviously this isn’t an option in weekend or once off games.

5.       Alternatively you could try playing as an NPC first — just to see what the game is about.  If you’re attending a weekend event, this will often give you the chance to play a variety of roles all designed by the Game Masters to give their players a lot of fun things to do.  This can teach you a lot about how the game works.

6.       Create a character capable of taking the initiative.  The ratio of Game Masters to players means that each player has to accept some responsibility for finding their own way to the plot and getting each other involved.  While most players will put in a lot of effort in drawing in new players for their first few sessions, it’ll help if your character is willing to put themselves forward and grab the plot hooks for themselves.

7.       Build in background ties with other characters.  If you’re chatting on the game’s forums or Facebook group, you can often find people directly who are interested in knowing your character.  Alternatively the Game Master may have a few ideas.  Background ties are great for enriching your LARP experience and give you all the more justification to get involved with certain characters and their stories.

8.       Understand that success in a LARP isn’t about “winning”, but about being part of an exciting and satisfying narrative.  Most LARPs don’t have a win condition, but even those that do are benefited when players understand that having fun really is more important than being prince.  This doesn’t mean that you can’t play in a competitive manner in a game that supports it, only that it’s unhealthy to get so hung up on win conditions that you can’t enjoy yourself unless you win.

9.       A LARP isn’t a good place to be a lone wolf.  Much of the game involves players entertaining each other with their character’s needs and shenanigans, and if you spend too much time separating yourself from that then you’ll soon feel that you’re missing out.  Most plot points are designed to entertain multiple characters so if you’re part of a team you’ll be more likely to get involved.

10.   Set reasonable goals for your character.  It’s easy to fall into the trap of thinking that they will walk into town and immediately become the best at something, adored by the many, and when they fail to accomplish these lofty goals within a day are often disappointed.  Be mindful that it takes time to accomplish great deeds.  Aim for something more simple — passing all the tests to become a member of a secret society or impress someone important so that you can join their entourage.  Or perhaps simply make a name for yourself as a reliable guide or an eccentric scientist specialising in rare fungi.

11.   Read the setting materials as they’ll have a big impact on what kinds of characters make sense – and will be useful – in the game.  Even apparently generic fantasy settings can have unexpected divergences that are good to know.  You don’t want to be referring to some faraway kingdom when the world is literally encompassed by the plateau people are playing on and the fence line (in-game) stands before the voice of space.

12.   If the rules overwhelm you at first, don’t take it to heart.  Some games are more rules-intensive than others and it can take awhile to understand it all — especially if this is your first go at something with a complicated rule-set.  Try and sit down with someone who can explain them to you.  Maybe even build a cheat sheet that details what you can do.  Understand that you won’t know it all before you go (most likely), but do try to re-read the rules every so often as the months go past until you get to a point of understanding what you can and can’t do with your character.

13.   Finally understand that LARPs are like novels, movies and television shows in that not every genre (or every director / writer) is for everyone.  This means that you might attend a game that just isn’t very appealing to you for a number of reasons.  If you don’t have a good time at a particular game, and you don’t think the problem is specific to that session, than consider looking further afield for different games that may interest you.  There is a *huge* diversity within LARP, so even if you find on that is reasonably good for you, it may still be worth dropping in on other games to see if you might not like them better or might even enjoy playing both for awhile.

14.   Take advantage of being new.  Approach players or Game Masters for help and advice when you are worried or bored.  Let them know that you are new (especially if it’s a large game) so that their characters can either be easier on you (to let you learn the ropes) or the player can introduce you to someone more helpful.

15.  Check the game’s social contract and make sure you understand what is an acceptable level of Player Character versus Player Character (PvP) conflict before you join the game.  It can be quite frustrating to be betrayed by your kith and kin when you were expecting a game of either friendly competition or factional loyalty where one only betrays members of other factions.  It can be equally problematic to bring your treacherous A-Game only to upset other players because the whole point of the game is to collaborate against an external threat.  Not every Game Master will tell you so it never hurts to ask.

16.  Learn what you can and can’t get away with.  In some games, stealing from a fellow PC will earn you merely some rough justice from that character when they find out.  In others, your character will be ostracised or even arrested and hung.  When in doubt, ask people out-of-character what the typical consequences for certain actions may be.  NOTE: They may not tell you about any consequences that would be specific to a particular situation but they should be able to give you general advice.  One PC might tolerate in-game theft more than another.  One PC might be given a more lenient sentence than the other.

17.  Be mindful of potential consequences.  Even in a game where theft is allowed, if your character consistently steals from other characters or hides most of the loot after a quest, you probably won’t be invited on further quests.

18.  Learn the local in-game hierarchy by asking plenty of questions in-game.  Use your character’s newness to help justify this.  Taking notes can also help you sort out who are the best people to approach for quests, plot assistance or protection and who are the ones who are more likely to hurt your character.

19.  Feel free to approach any player after game to ask them for advice.  Even (and perhaps especially!) the ones playing the powerful and intimidating characters.  The player will likely feel flattered in your interest and many of those playing key figures in the game will happily help you find something to do.  Of course, you can find fantastic player mentors (and even character mentors!) in any role of the game so don’t neglect to ask questions of those who play quieter or more low-key characters.

20.  Typically information in a game will be spread out among many characters to ensure that more players get something interesting to do.  This means that if you feel like you don’t have everything you need to get it done, you probably don’t and will need to talk to other characters to figure out the rest.  Game Masters do this because creating a plot that entertains several players is clearly a better investment of time and effort than a plot that entertains only one.

21.   Share information and you’ll gain information!  While the temptation to grab a plot, hug it to your chest and run away with it can be quite strong, bear in mind that most plots need allies to succeed.  Besides, if you become known as the person who helps spread the plot around, other people will remember you more and be more willing to involve you in their own plots.