So last fortnight we discussed a basic overview of the Drifter’s March LARP event we ran back in August, covering off on the different factions and meta-plots included. Of course it’s all well and good to know about the basic set up of a game, but what actually happened during it? What did the players actually *do*? 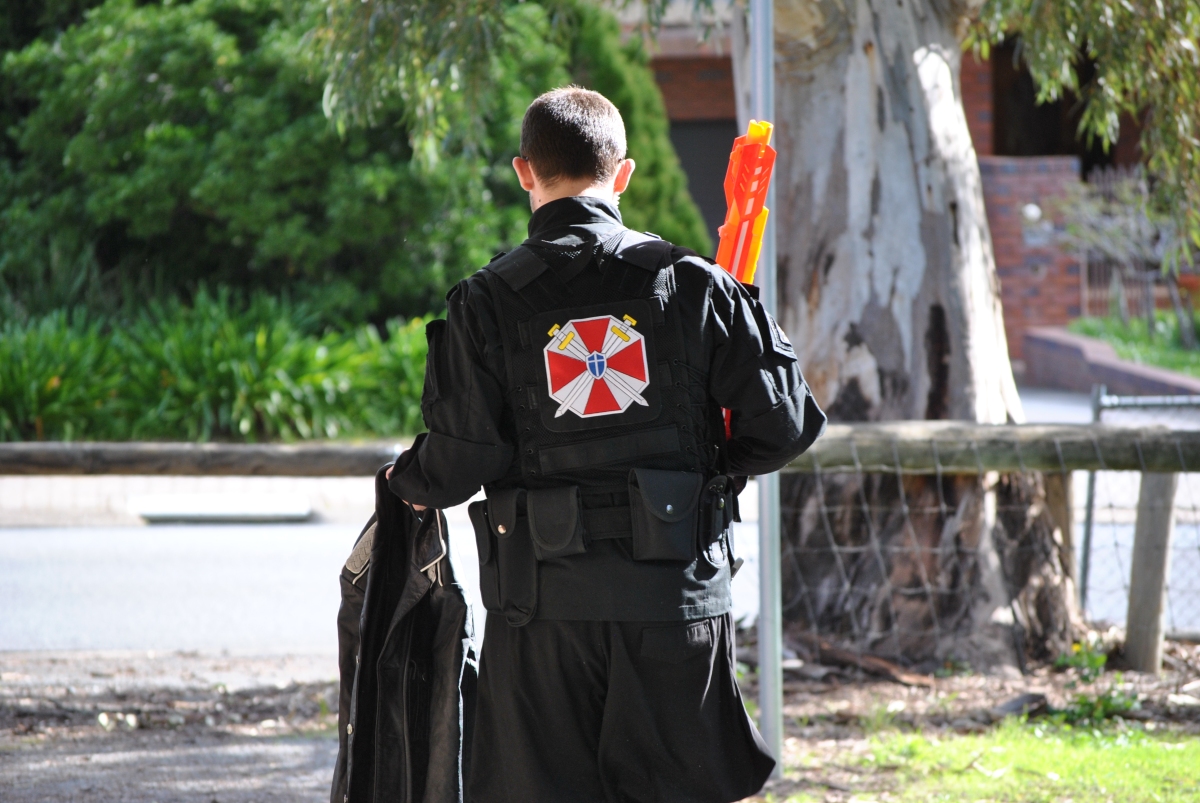 When the game began, a few of the rangers were injured in a firefight with the robots and their leader was badly wounded.  One of their lead scouts (an NPC or Non Player Character who was doomed to die) managed to open the door to the inn and call for help before being shot in the back of the head from the robot on the other side of the river and dying with a walkie talkie held in her hand.

Those in the hall leapt into action and a bunch of them headed out to find the rangers and provide support.  They could also hear a pair of reporters pleading for help.  One had her leg caught in a trap and needed someone who could disarm it.  (Each character had five skills which could include the ability to disarm traps, pick locks, or shoot guns, among other things).  They managed to get around the robot and move into position but they didn’t have much time to evac the ranger captain before they were attacked.

A combined effort saw the robot taken down, and the others rushed off back to the inn.  The dying ranger captain was literally carried part of the way.  We used a hall for the game and repurposed one of the side nooks into a little medibay complete with two camping cots and a whole lot of fake surgical equipment, blood bags, etc.  The ranger captain was brought in here for immediate surgical attention.  The inn’s physician roleplayed the surgery, using a local anaesthetic and trying to keep the captain relaxed while he kept trying to bark orders to his subordinates.

Over the course of the day, a multitude of people ended up lying on those hospital cots or getting first aid from one of the merchants and the ranger medic.  Where there’s gunfire, there’s casualties!

The Drifter’s Inn was a reasonable sized hall with a counter in front of the kitchen (for the wait staff and the service of a hot lunch of spaghetti) and four little side nooks that were normally open on one side.  We covered the opening on one nook to make a *locked* area for the reporters to set up their computer (complete with secret information in a hackable file) and their printer (so they could make up quick newspapers as the game progressed).

Unfortunately for them, the Artificer’s Union was very suspicious on them, picked the lock and got inside.  A journalist spotted them just as a rapid hacking Artificer saw they had compiled data on the union, and before he could figure out that they were on the same side.  When the journalist commanded him to get out, he sent a surge of kinetic energy into the computer — frying it permanently.  Since one of the inn staff was casually lounging in their room when it happened, the journalists weren’t very pleased at all and it took some major diplomatic wrangling to get everyone on the same page again.

One of the independent salvagers was a wanted man in New Yuvon — one of the journalist propagandists who had fled and couldn’t recognise his brethren because they’d all had plastic surgery.  The merchant of secrets and information tried to blackmail him, and when he refused, she tried to kill him in a panic but was taken out by his allies in a gunfight outside the inn.

Some artificers and rangers found the Policebot.  Policebots are a pre-incident robot that had enough processing power to tell the difference between wastelanders and Zed-Synths unlike the murderbots that were churned out post-incident that just don’t have that capacity.  Unfortunately it had been affected by the same “Kill All” programming so they had to struggle to capture it.

Once they had managed to capture it, one of the rangers who’d had PTSD due to an incident with a robot in his back story kept attacking it.  His fellow rangers, and the artificers present, had to keep talking the robot down to prevent it from attacking the man in turn.  Eventually the poor ranger fell to his knees in defeat, pleading with them to understand that the robot will eventually turn on them and kill them all.

The grounds themselves were littered with a variety of things to find.  There were balls of scrap that could be used to repair equipment.  There were little trapped tins with notes on the outside from one of the cultists.  There was a little campsite with Varus Draconis’ diary and some specimens of infected flesh.  There were even handbags with various gear in them from those who had succumbed to robot or Zed-Synth attacks in the past.

At the very end, a psychic sensed the approach of a horde of Zed-Synths.  As they assembled on the lawn, ready for the attack, the lead cultist who had hidden among them stepped forward, declared the superiority of Zed-Synths, and injected himself with the improved serum.  Random Zed-Synths attacked people as did Varus Draconis, and to begin with they held their own but each wave of Zed-Synths depleted their ammunition.

Varus Draconis hit the ground, but then mutated and rose again (I gave him a mask and a spear — the latter represented a bony protrusion).  He infected those who had been downed (one of whom was dragged away by her sister) and continued to attack. The infected wastelanders rose as well and begged those hiding inside the inn to let them inside.

Varus was defeated a second time and as he underwent his final mutation, those who were infected but psychic in some way managed to throw off his control and slowly battered him down to death while others hid inside the inn and the shuttle, hearing the horrors that occurred outside.

In the very end, all of those infected by Varus himself found themselves as a sort of half-Strain … affected by the Zed-Synth infection and yet still somehow themselves.  The devastation was terrible but in the end the shuttle launched into space — ready to find its way home to Earth — and a treatment for those infected-but-not-yet-turned was found using cloning technology and the need for a replacement wastelander gland.

So as you can see there was a lot to see and do in this particular game.  This is only scratching the surface of what went down that day.  Next fortnight we’ll discuss how I prepared for such a big and prop-heavy LARP and the fortnight after that I’ll detail the lessons I learned from running my first BIG event, and certainly my first event with live combat rules (i.e. NERF guns and foam swords).